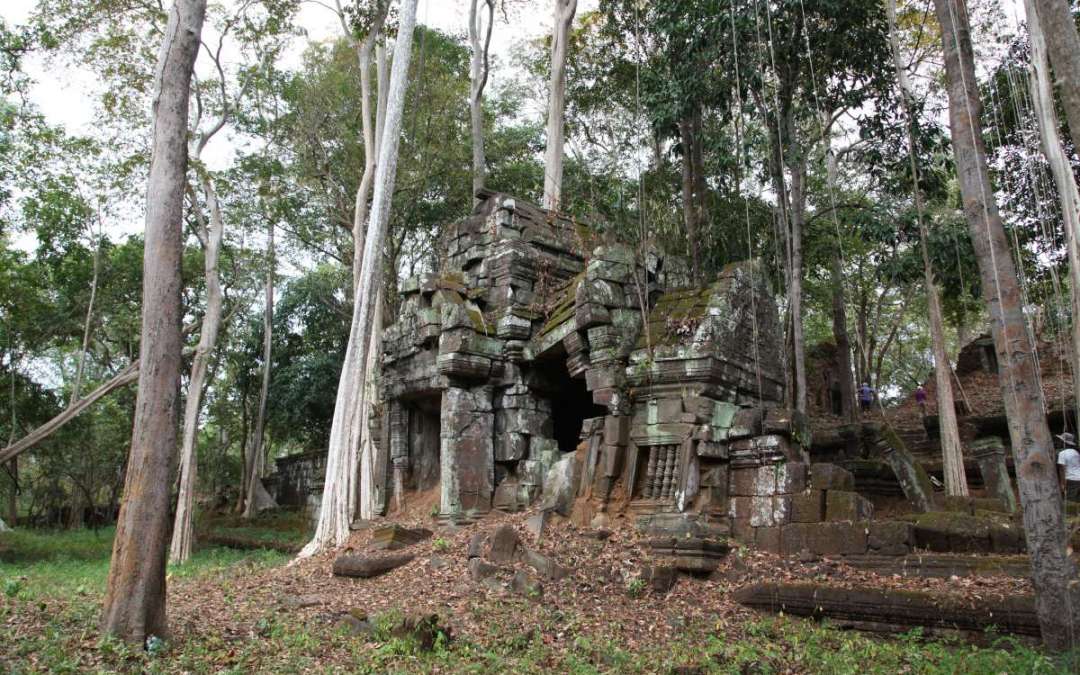 Discover the best ancient temples for birding in Cambodia! Siem Reap and its neighbouring provinces are home to hundreds of amazing temples, including Angkor Wat, Ta Prohm, Koh Ker, and Beng Mealea. With their protected forest surroundings and remote locations, many of these magnificent temples offer fantastic opportunities for all levels of bird watchers. Here are our top recommended sites to combine these magnificent historical sites with some unique and world-class birding experiences! 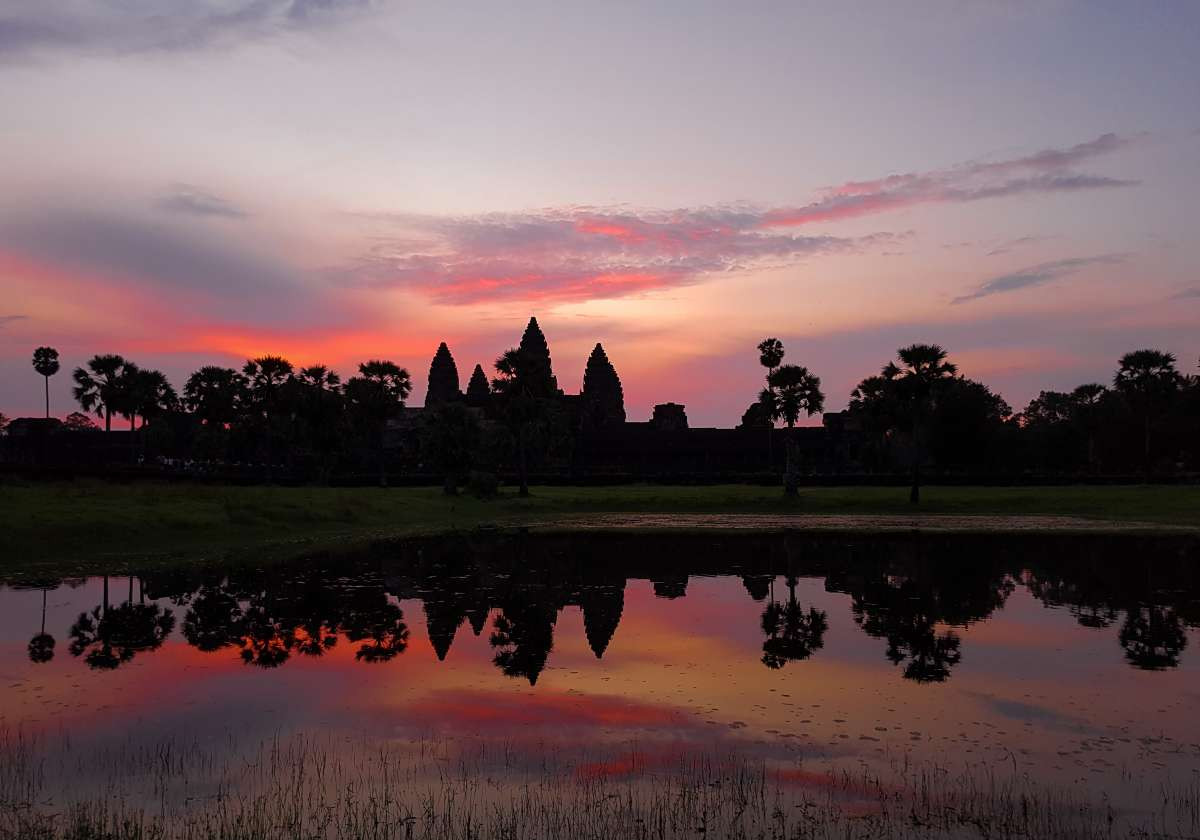 Built between 1113 and 1115 by King Suryavarman II as his state temple and capital city, Angkor Wat is one of the largest religious monuments ever constructed spanning over a 200 hectares area. As the most celebrated of all Cambodian’s monuments, it is considered to be the symbol of the nation and is represented on the national flag. Originally dedicated to the god Vishnu, it was converted to Buddhism in the 12th century and continues to be a significant pilgrimage and worship site for both domestic and international adherents of Buddhism to this day.

Around Angkor Wat temple there is Primary forest mixed with the lower growth that offers a great place for some wintering species as well as hiding places for the owls. The moat around the Temple itself provides a great habitat for some waterfowl and migration species as well. During the winter migration, some of the key species to see include the Hainan Blue Flycatcher, White-throated Rock-thrush, Pale-legged Leaf Warber, Two-barred Leaf warbler, Black Bazza, Forest Wagtail, Asian Barred Owlet, Brown Boobook, Red-breasted Parakeet, Pied Hornbill, Lineated Barbet, Coppersmith Barbet, and the Black-capped Kingfisher.

Learn more about Birding at Angkor Wat and our Featured Tours 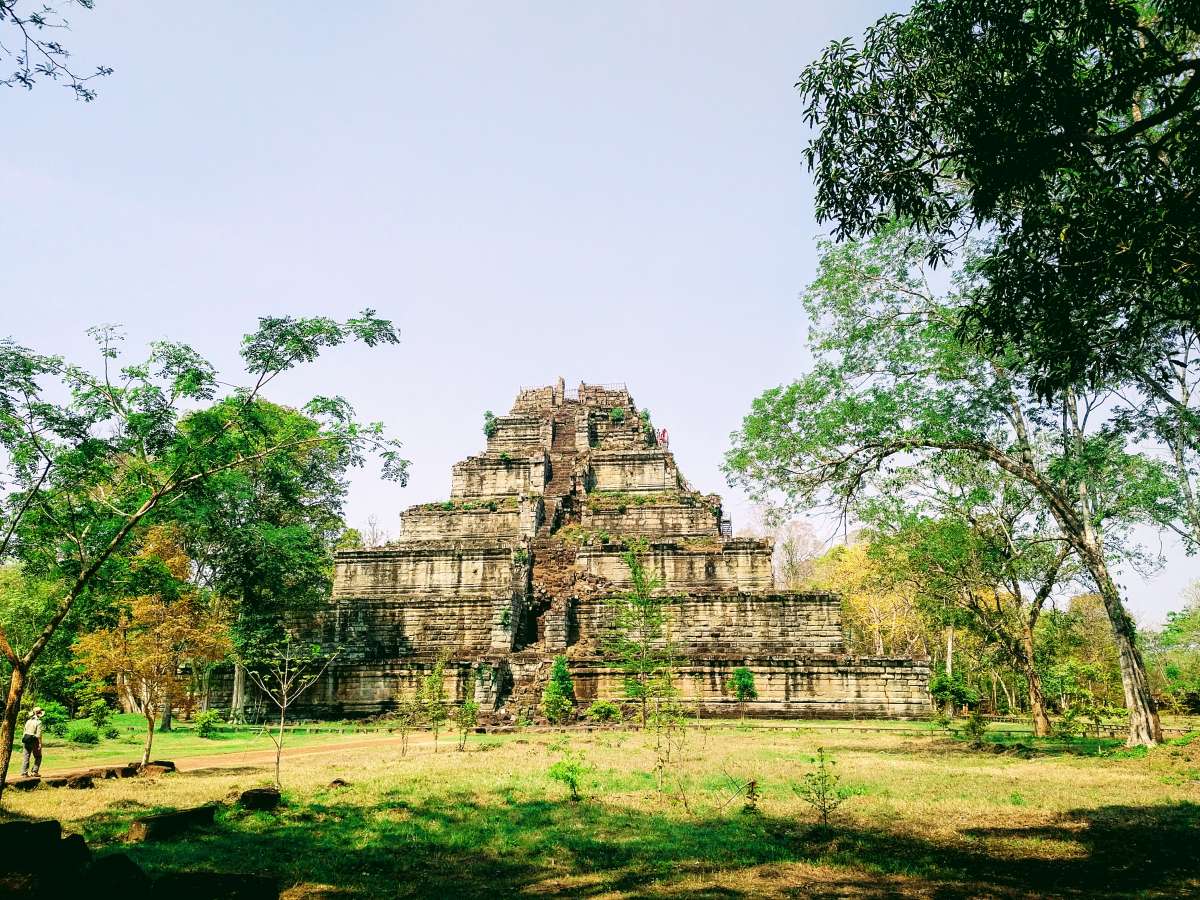 Koh Ker is located more than 150km northeast of Siem Reap town in the province of Preah Vihear. It was briefly the capital of the Khmer empire between 923 and 944 AD under king Jayavaraman IV and his son Hasavaraman II. After the Khmer empire was established in the Angkor area, Jayavarman IV moved the capital in 923 AD almost 100km northeast to Koh Ker. A large number of temples were built under his reign, until his successor returned to the Angkor area about twenty years later.

Its surrounding deciduous dipterocarp forests typically have an open canopy combined with a grassy understory. Members of the forest’s namesake family Diptercarpaceae dominate the vegetation. While all other Diptercarp-trees are evergreen, the six species in the dry forest are the only ones that lose their leaves during the dryer months of November to April. As a result of this unique habitat, this complex is great for seeing Black-headed Woodpecker, White-rumped Pygmy Falcon, Great Slaty Woodpecker, Greater Yellownape, White-crested Laughingthrush, Rufous-winged Buzzard, Collared Falconet, White-bellied Woodpecker, Grey-capped Pygmy Woodpecker, and Brown Prinia

Learn more about Koh Ker and our Featured Tours 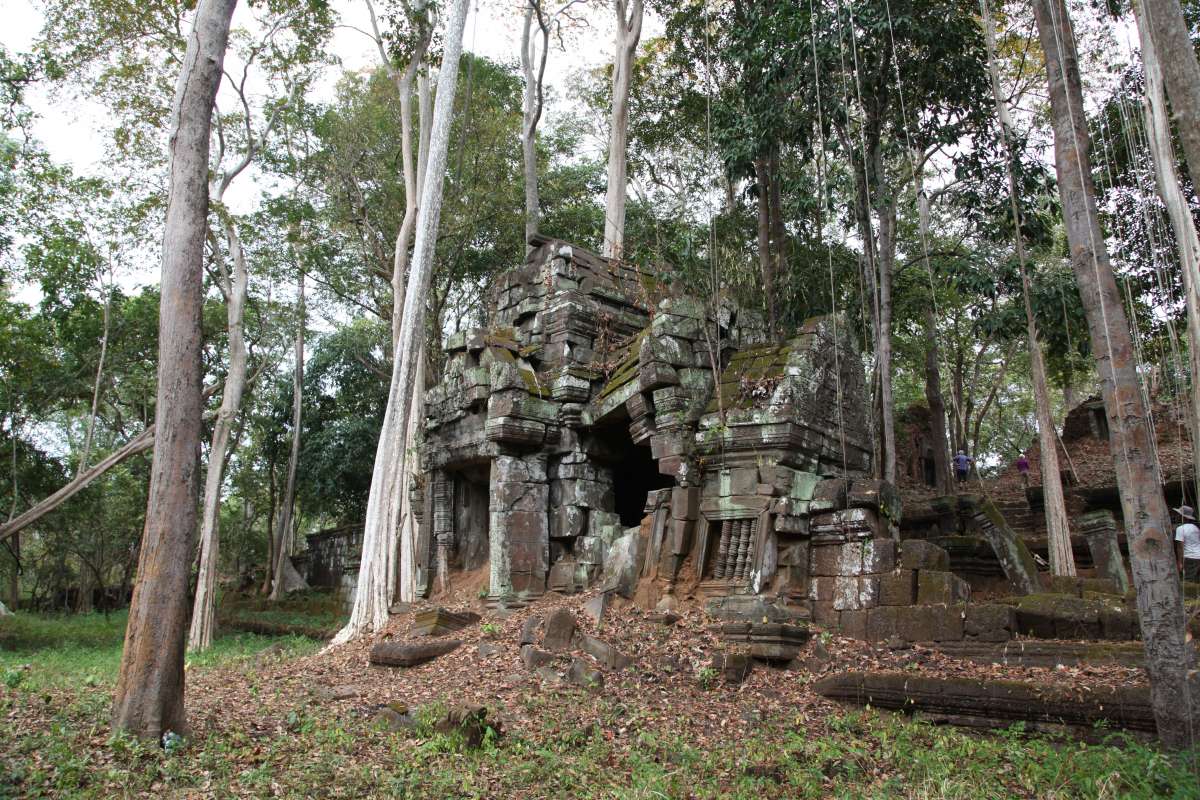 Deep in the Cambodian Northern Plains lies a hidden and deserted pre-Angkorian temple known as Prey Veng temple (or Chen Srom Temple). Located near Prey Veng Village in Kulen Promtep Wildlife Sanctuary, Prey Veng is just 300m from the banks of a 12th-century baray (reservoir) where critically endangered species such as Giant Ibis (February-May) and Sarus Crane (February-August) fly in to feed.

The Northern Plains of Cambodia are the largest remaining intact block of the unique landscape that once covered much of Indochina. Small rivers in the semi-evergreen forest of the Northern Plains make this area special for shy and riverine species especially White-winged Duck. The vast amount of dry forest is also home to many different species of woodpecker such as the Black-headed Woodpecker, the Great Slaty Woodpecker, and the White-bellied Woodpecker. Some of the other key species that can be found here include the Indochinese Bushlark, Indochinese Coukooshrike, Burmese Shrike, White-browed Fantail, Brown Boobook, and Collared Scopsowl.

Learn more about birding Prey Veng and our Featured Tours 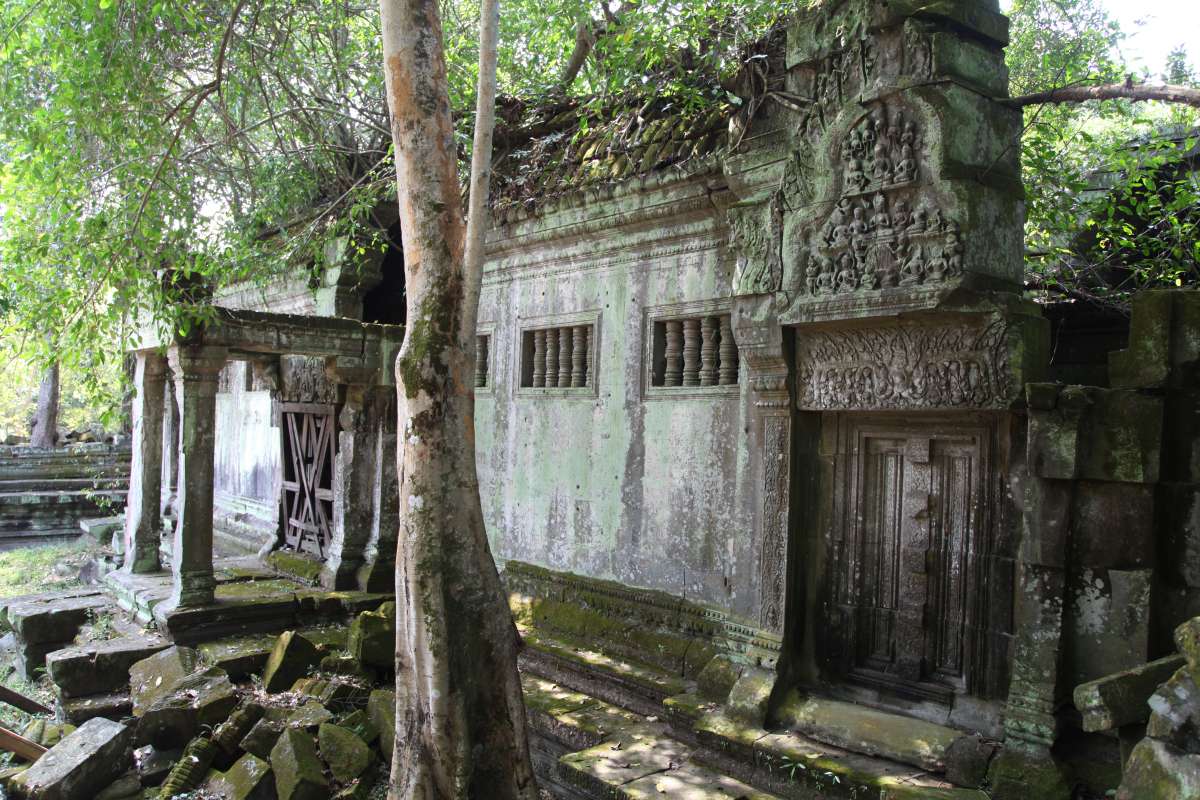 Beng Mealea is a very impressive temple built in the reign of King Suryavarmann II, 12th century CE, and modified by Jayavarman VII. It is located about 77 Km Northeast of Siem Reap town and faces the eastern part of Kulen mountain. It is situated along the Royal Road to the east of Angkor where you can see the ancient bridges such as Spean Ta Oung, Spean Khav and Spean Khmeng.

Beng Mealea is one of the most beautiful temples in Siem Reap. Deserted and untouched, its ruins are covered with a number of trees including fig trees that provides a lot of food for birds here. The primary forest mixed with the ricefield around the temple are also a great habitat for some migrant species including some raptors as well. Key species that can be found here include the White-throated Rockthrush, Hainan Blue Flycatcher, Oriental Pied Hornbill, Common Hill Myna, Asian Barred Owlet, Lineated Barbet, Pale-legged Leaf Wabler, Two-barred Warbler, White-rumped Shama, and Vanhasselt’s Sunbird.

Learn more about birding in Beng Mealea and our Featured Tours 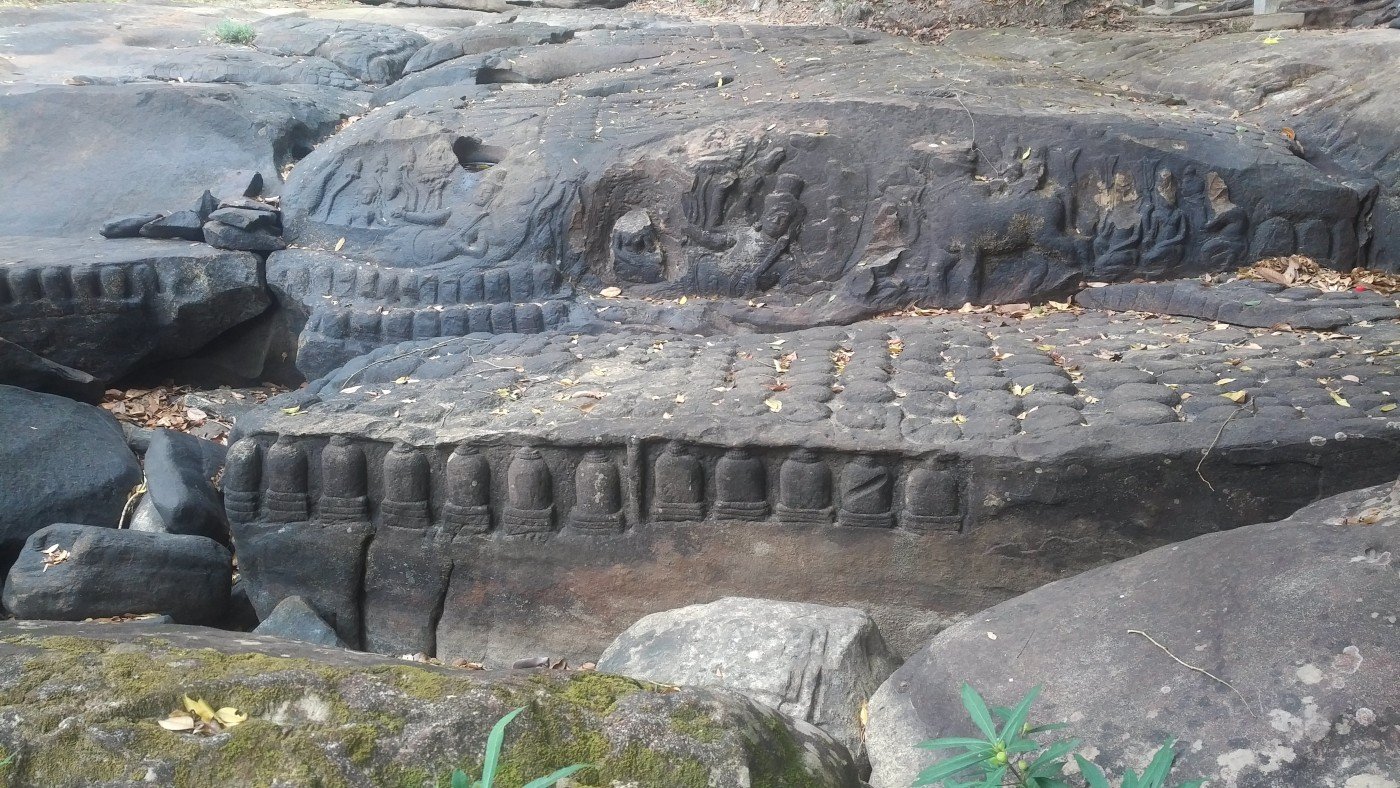 Kbal Spean is an ancient Khmer site in Phnom Kulen National Park, located about 47km North-East of Siem Reap and the main Angkor monuments. The site stretches out over a length of about 150 meters through the jungle along the Stung Kbal Spean river, known as the “river of thousand lingas”.

Its location in the northern part of Kulen Mountain offers a fantastic opportunity to explore some of the dry dipterocarp forest, rainforest and some waterfalls where there are some special birds such as Woodpeckers and Falconet. Its beautiful forest is especially great for seeing the migratory birds as well. Key species for this site include the Black-headed Woodpecker, Great Slaty Woodpecker, Indochinese Bushlark, Blossom-headed Parakeet, Brown Prinia, Burmese Shrike, White-throated Rock Thrush, Indochinese Bushlark, Vanhasselt’s Sunbird, Black Giant Squirrel, and Hainan Blue Flycatcher.

Learn more about birding in Kbal Spean and our featured tours.

Ang Trapaeng Thmor (ATT) reserve is a 12,650-hectare protected area and one of the most important non-breeding ...

Our guides share their top ten birds to see in and around the forest temple of Koh Ker, one of Cambodia's unique and beautiful archeological sites!

Cambodia is home to some of the rarest birds on the planet with some of the only sites in the world to see ...

Phnom Krom is a 140-meter high ancient hill southwest of Siem Reap, known for its pre-Angkorian temple at its peak.