Thanks to all contributors

Between the 1st and 10 May, both Blue-winged and Hooded Pitta were heard in a garden in central Phnom Penh (HN). This is the first time the latter species is noted on passage outside forested areas.

At Kampong Trach, Black-headed Ibis counts peaked at 192 birds on 4 June, with 173 birds on 21 June and still 126 birds on 5 July (US per RvZ). An islet in the bay south of Kampot estuary held 7 Bridled Terns on 17 May and could be a potential breeding location. The boat driver recalled collecting hundreds of tern eggs from this same islet approximately 20 years ago, although the species was not clear (RO). A Red Knot in breeding plumage – a first record for Cambodia, and two Great Knots were photographed in the estuary on 28 May (RO).

On 29 May, a Slaty-breasted Rail with two youngs were found near the entrance to Bokor National Park, and a female Greater Painted-snipe photographed there was the first for the south-west (RO). Details on records made during a SVC guide training trip conducted in the O’Som area, Central Cardamoms PF, at 600m, from 7 to 11 April were received too late to include in our previous review and are incorporated here (SM, SvO). Amongst the 123 species recorded was the first sighting for the south-west of Zebra Dove (seen in O’Som village), two Golden-crested Mynas and five Hooded Pittas. Two Asian Emerald Cuckoos and Abbott’s Babbler were unusual altitudinal records.

A single Blue-breasted Quail was flushed and a male Pied Harrier seen at grasslands near the crocodile lake, and White-bellied Woodpecker was present in the more open forest. Mist-netting at Dalai Mountain, Phnom Samkos WS, caught a Dark-sided Thrush in hill evergreen forest at 1100m on 17 June (CS). This is only the sixth record of this species since first found in 2000.

Another Greater Adjutant was found badly injured on 23 July in the Baray BFCA. It was taken to ACCB, where one leg had to be amputated and it subsequently died (MH and SoV). On 24 July, 135 Black-headed Ibises and 88 Lesser Adjutants were found in the same reserve (per SoV).

Hooded Pitta was noted at Kbal Spean from 17 May (MH), only the second known site for the species in the north-west. A good news was a roost of at least 20 Oriental Darters at the Angkor Thom moat on 9 July (RO).

For the second year in a row, Spot-billed Duck ventured in the northern plains, with two birds seen again at Trapeang Pring, Chhep PF on 11 June (HR).

An exceptional count of 128 vultures, including 86 White-rumped and 39 Slender-billed Vultures, was made at Western Siem Pang on 8 July; a single Greater Adjutant was amongst the vultures there on the same date (per SC).

Although partly falling outside the review period, a trail survey in Seima PF from 16 April to 5 May yielded many records of interest (JS). The most exciting find and a first record for Cambodia was undoubtedly the sighting of 3-5 Collared Babblers (apparently G.t. luciae) in mixed bamboo/semi-evergreen forest on 3 May.

A Brown Fish Owl was seen along the main road on 2 May. At at the “finfoot pond”, there was a single Oriental Darter on 17 April and a single Purple Heron, an addition for Seima PF, on 5 May. Other noteworthy records included two sightings of Blue-throated Flycatcher, daily contact with Hooded Pitta from 21 April onwards, four out of a group of ten Dusky Broadbills cooperatively building a nest on 3 May, a single Black-backed Kingfisher on 26 April, Pale-legged Leaf-warbler still present on 22 April and Black-browed Fulvettas seen at two sites. 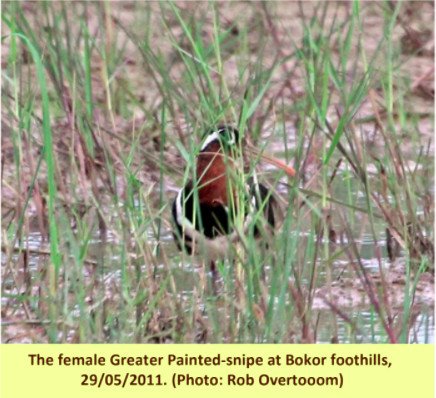