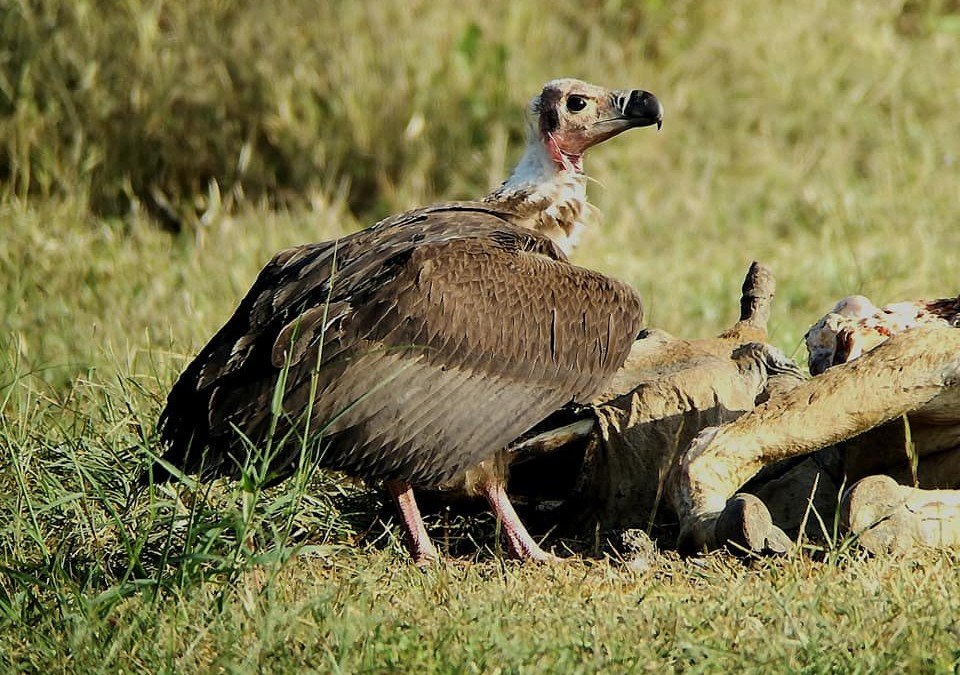 We ended up with a great list of exciting birds on our thirteenth Cambodia tour ranging from the enigmatic Giant Ibis, strutting Bengal Floricans, the rare and gorgeous White-rumped Falcon, the endemic Mekong Wagtail, down to the tiny and only recently discovered Cambodian Tailorbird. Some other stars included a fabulous pair of Milky Storks, multiple sightings of the very cute Collared Falconets that popped up and posed for us, some neat owls – Spotted Wood Owl, Oriental Bay Owl and Spotted Owlets, and a remarkable eleven species of woodpecker. Most exciting of all, though, was a Giant Ibis with chick!

Our visit to the vulture restaurant with three species seen incredibly well was definitely memorable, too. On the passerine front, we also had a lot of fun with some notable species including Cambodian Tailorbird, Racket-tailed Treepie, brilliant Red-billed Blue Magpies, a little group of spritely Chestnut-headed Babblers, White-throated Rock-Thrush, and some very pretty sunbirds and flowerpeckers.

As always, our trip began with an exploration of the incomparable Angkor Wat. A predawn departure from our comfortable hotel saw us making our way to the entrance to the temple where we searched for some neat birds before enjoying a tasty box breakfast as the sun came up. We then explored the woodlands of the temple grounds where we kicked off our Cambodian birding with a gorgeous Black-capped Kingfisher, Lineated Barbets, Hainan Blue-Flycatchers, and a lovely but shy White-throated Rock Thrush. Our temple guide explained some of the history of this amazing ancient city and its buildings as we constantly interrupted him to check out the latest sighting. Over the course of the day we found large numbers of Red-breasted Parakeets and a couple of impressive Alexandrines amongst them, but the real focus of the day was the magnificent 12th century architecture of this incredible UNESCO site.

The following day we motored out, skirting the northern edge of the massive Tonle Sap Lake as we headed to the RAMSAR site Prek Toal. Transferring to two small boats we wended our way through the inundated forests to the roosts of astounding numbers of Painted Storks, Spot-billed Pelicans, Little Black Cormorants and Black-headed Ibises. Sightings of the much hoped for Milky Stork and Greater Adjutant we greeted with great enthusiasm! And a small flock of Glossy Ibis was an added bonus.

Next, we headed north to the dry savannah woodlands of the north in Preah Vihear Province, with some casual birding en route, the highlight of which was a stunning pair of Black Bazas which were hunting grasshoppers near a local farm. The occupants were bemused by our activities, to say the least! After a tasty picnic lunch en route, we arrived at our comfy tented accommodations in this very remote corner of Asia.

After settling in at Okoki we ventured into the surrounding forest to wait patiently at a hide overlooking a waterhole in hopes of an appearance of the White-winged Duck. Sadly, our patience did not reward us. But a superb Oriental Bay Owl made up for our dip on the duck. The birding in the surrounding forest was very successful, however, with a great list of birds including Thick-billed Green Pigeon, Eurasian Hoopoe, Square-tailed Drongo-Cuckoo, Laced Woodpecker, Collared Falconet (the world’s smallest raptor), the not-so-Common Woodshrike, Blossom-headed Parakeet and a bunch more.

From Okoki we took a short drive to the so-called vulture restaurant Boeng Toal. We made numerous stops en route to look – successfully! – for the increasingly rare White-rumped Falcon. Continuing our drive, we also encountered Crested Serpent-Eagle, Red-billed Blue Magpie, and Rufous-winged Buzzards.

Our visit to Boeng Toal started off very well, with a tip off from the local ranger there that a Sarus Crane was hanging out in the nearby grasslands. We made our way back the short distance to the spot and soon spotted a head poking up above the very long grass. Maybe not the whole bird, but we did see the most important part of the bird! Later we walked to the nearby hide to wait for the vultures to appear. As we waited, we had great views of some excellent birds, amongst them Vinous-breasted Starling, Red-wattled Lapwing, Lanceolated Warbler, and White-browed Fantail. Eventually, large numbers of Red-headed, White-rumped and Slender-billed Vultures arrived to squabble over their meal – what a sight!

Next we headed to Tmatboey, home to those two rarest of ibises – Giant and the White-shouldered, two of the main targets of any tour to Cambodia. Arriving in the heat of the day, and it does get very hot, we took a break after a delicious lunch prepared by the ladies of the village, before taking a short walk through a maze of dusty trails to begin our birding here where we found our much-hoped for White-shouldered Ibis. We continued the following morning with our search for the Giant. After a bit of a wait our patience paid off and we were able to scope a chick and then its parent at length. What a creature! The woodlands at Tmatboey don’t look all that promising at first glance but are actually teeming with birds. It’s not until the evenings and then the mornings that this becomes apparent. The bird song and activity are remarkable, and we spent two mornings wandering around the dry woodlands in search of our quarry. As we continued birding, we found a personal favourite, the Black-headed Woodpecker (the world’s best looking woodpecker?) as they excitedly puffed out their bright red rump feathers, a wing-flicking family group of Great Slaty Woodpeckers, handsome Burmese Shrikes, Black-collared Starlings, and little groups of Small Minivets. As usual, the woodpeckers provided much entertainment and along with the aforementioned Great Slaty and Black-headeds, we found Common Flameback, Greater Flameback, Grey-crowned Pygmy-Woodpecker, and Rufous Woodpecker. A littlegathering of Neglected Nuthatches also put on a great show.

Leaving the northern plains we turned south and headed to the Steung Grasslands near Kampong Thom. Arriving in the late afternoon we were met by the local rangers who guided us out into the grasslands and fields to search for the rare Bengal Floricans which showed brilliantly in flight, not once but three times. This member of the bustard family (Otididae) is critically endangered with the total world population estimated to be only 350-1,500 birds. This small area in Cambodia is absolutely vital to the survival of the species and it’s hoped that visits to the area by birders will help with the remarkable efforts of the local people in this very poor country. Sightings of the birds are by no means guaranteed so it was a very happy group all round. The following morning we headed to a different area of these shrinking grasslands and had a very pleasant morning of exciting birding with Indian Spot-billed Ducks, Pacific Golden Plovers, Wood Sandpipers, Dusky Warblers, White-winged and Asian Pied Starlings, amongst others.

Taking our leave of the grasslands, we drove eastwards and over the mighty Mekong River by ferry (a very fun experience!) to the riverside town of Kratie. The major birding attraction here is the relatively recently described Mekong Wagtail, which specializes on making a living on the little rocky islands of the shallow braided parts of the Mekong River. We took a morning boat trip out to see them, which was lovely and refreshing, and also found a very confiding pod of the mysterious Irrawaddy Dolphins as well as an unexpected pair of very responsive Golden-bellied Gergygones.

This is quite a varied tour in terms of the habitat types we visit, and our next birding was in quite a different environment – the lowland tropical rainforest of Seima. As we waited for dusk to fall at a not very salubrious building site overlooking some lovely rainforest, our hoped-for Green Peafowls refused to show (maybe too much disturbance now?) but we were able to enjoy some other great birds, the most exciting of which were probably the near endemic Red-vented Barbet and the rather scarce Gold-crested Myna.

The following day we left our hotel early to visit a different area where we breakfasted with the birds before venturing into the forest. This was a fun and successful morning with some lovely sighting including near-endemic Grey-faced Tit-Babblers, Pin-tailed Green Pigeons, Green-eared Barbets, cavorting Oriental Pied Hornbills, Great Iora, and Yellow-bellied Warbler. A non-avian highlight was a family group of simply gorgeous Black-shanked Douc Langurs, a highly endangered primate that has found a haven in these eastern Cambodian evergreen forests. Later we visited a productive forest area where we were rewarded with a couple of Swinhoe’s Minivet as well as bunch of other fancy birds including showy Annam Barbets, Bar-winged Flycatcher-shrikes, a zippy Besra, and a single Lesser Racket-tailed Drongo.

On the outskirts of Phnom Penh, we stopped at a rundown little temple where we quickly found the newly described Cambodian Tailorbirds. Birdlife International classifies it as Near Threatened; as they say “This remarkable newly-discovered species is inferred to be suffering a moderately rapid population decline due to habitat conversion throughout its range” due to the fact its entire range is within the outer areas of Phnom Penh, an ever-expanding city.

Our last leg of our birding journey took us north of Phnom Penh to an area of grasslands on the southern edge of Tonle Sap Lake. Our main target was the highly localised Chinese Grassbird, which we found after some persistent searching. Our tour of this fabulous country finished off well with some excellent birds, highlights of which were a cooperative Watercock, the very attractive Pheasant-tailed and Bronze-winged Jacanas, and best of all, the increasingly rare and endangered Yellow-breasted Bunting.

Lastly, I should make mention of some of the more widespread and commonly encountered birds that were nevertheless always a delight – Indochinese Rollers were seen almost daily but never ceased to be greeted with enthusiasm; Burmese Shrikes were likewise common but always a welcome sight; gem like Little Green Bee-eaters were seen and admired almost daily; as were the raucous but colourful Red-breasted Parakeets. 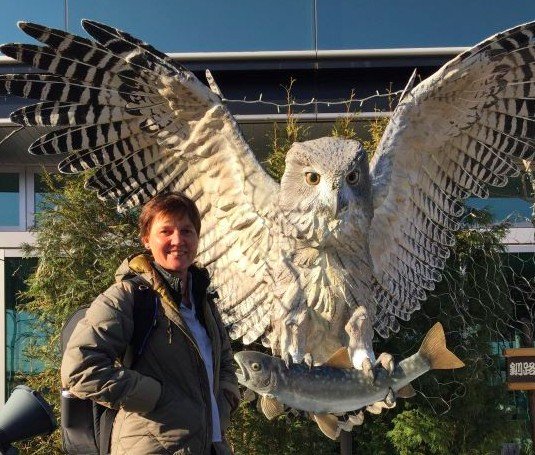 Susan Myers has been birding and traveling in Asia for over thirty years now, something she can’t quite believe herself! She is passionate about Asia and its wildlife. She also strongly believes that the combination of incredible and diverse wildlife, ancient and fascinating cultures, and the best food in the world are unique to this amazing continent.